Save for Later!
Jump to Recipe Print Recipe 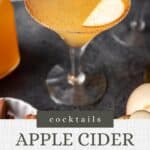 This apple cider martini is made with crisp apple cider, vodka, apple brandy, and a generous pinch of sweet cinnamon. It’s chilled to perfection and the perfect way to celebrate the Fall season.

A few notes about the ingredients:

❄️ How to Store

To store: As with most cocktails, this apple martini is best served fresh and chilled. If you need to store any remaining cocktails, store them in an airtight container in the refrigerator for 1 to 2 days without added ice.

To freeze: Freezing this martini is not recommended.

Can martinis be served on the rocks?

Yes! If you do not have a martini glass, or you prefer an extra chilled martini, serve your martini on the rocks in an old fashioned cocktail glass. This martini would be great served over crushed ice or an ice ball.

It really depends. A traditional martini typically contains vermouth and this helps make it slightly sweet, but different garnishes can really change the flavor. Martinis served with olives are less sweet and more dry. This apple martini, on the other hand, is definitely a sweeter, fall-flavored martini.

Are martini and margarita glasses the same?

No martini and margarita glasses are not the same, but you can certainly use them interchangeably in your home kitchen if you’d like! Martini glasses are typically smaller and hold less liquid. If you are using margarita glasses to serve this apple martini, it won’t be as full but that is completely fine!

Please make sure to use fresh apple cider, not apple cider vinegar! These ingredients are very different and cannot be used interchangeably.

Share your cooking with me! If you make this recipe, I'd love to know! Tag @yourhomemadehealthy on Instagram or leave a comment with a rating and some feedback at the bottom of this page! 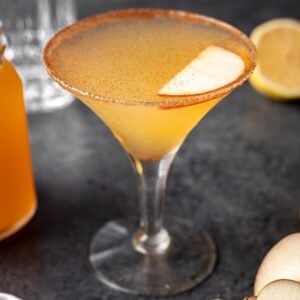 Want more recipes like this delivered right to your inbox? Be sure to subscribe above and never miss a thing!

I'm the recipe developer, photographer, and writer behind Your Home, Made Healthy! I hope to inspire you to create healthy meals for your family without spending tons of time in the kitchen. Although my recipes focus on healthy eating and fresh ingredients, there is no diet talk here. Click below to find out why!

Learn more about me →